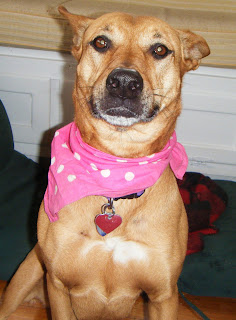 Today at a local consignment shop, I was happily chatting away with the woman who runs the place. Since I am usually such a shy, quiet person, that may come as a surprise to you (or not). The conversation centered around my Miss Zia-Maria (my three-legged rescue dog who is the heart-of-my-heart these days).

The woman asked me how old she was and (typical of my communication style) I gave her the long answer. "Let's see, we got her just after we returned to the USA fro our Peace Corps Ukraine adventures. That was in 2007. She was about a year old then and had just recovered from having her leg amputated several months before.” I said, babbling along in my usual fashion.

The conversation moved on to what it is like to have a three-legged dog. This is typical.
When people see me with my three-legged dog, they often say something like, "How wonderful of you to take her in."

What is that all about? She's just missing a leg. It is not as if she has major issues to deal with. She is not handicapped in the least by missing that limb. In fact the word “missing” is inappropriate in that sentence - I don't think Zia even knows her leg is gone!

But walking a three legged dog does require some skill. At least if you are walking my three-legged dog. It is the rear left leg that is missing and what that means is that she tends to lope along rather than to actually walk. It is easier on her hips if she can get up some momentum and let gravity help her move forward. What that means for me is that I am trailing along behind her, moving just short of a run myself.

We make quite a picture I’m sure. My own left arm extends straight out in front of me and I have to move along at a rapid pace, trying to keep up, sweat rolling down my forehead and into my eyes. Trying to keep my dignity is about all I can do.

I am sure the locals do think we are a bit eccentric. I live in a mill village and most people around here just don’t take their dogs walking. So there I am, my long locks (below my waist now) flying out behind me as I move quickly behind my dog who seems to think she is the lead dog in a team running at the Iditarod. Miss Zia typically wears a bandana and often, despite the heat and humidity, she sports a Thundershirt (to help her with her anxieties about some dogs, balls and other assorted moving objects) so we do make quite a picture when I take her out for her morning walks.

"There's that crazy old, grey-haired, over-the-hill hippie-woman trailing behind that skinny, three-legged, red dog again," says the neighbor lady as she peers out from behind the curtains. “And the dog is wearing clothes!” People stop what they are doing when we race by.

I spend lots of time flying down the street behind my spunky pup. I’m very grateful Miss Zia came into my life, but it occurred to me today she gave me some gifts I never have really acknowledged. With her left rear leg amputated, she is the one who would seem to have special needs, but it was actually me who needed some rehabilitation.

In 2005, I lost my left breast to cancer. The reconstructive surgery involved cutting muscles from my back and ended up leaving me unexpectedly rather helpless. I had a hard time using my left arm to even get up out of a chair. Months and months after the surgery, even trying to turn over in bed was a logistical challenge. I could not lift things nor carry much of anything. For a woman who used to make her living toting heavy tool boxes and tech data out to repair radar systems on fighter aircraft, this was all very humbling! Even a year after the surgery, I couldn't carry my laptop bag on my left shoulder for more than a short walk.

In 2008, I decided I wanted to walk the Camino (about a 1000K walk across a couple mountain ranges in northern Spain); I knew I would need to carry a backpack. I knew I would need to train. So Miss Zia became my coach and motivator. She made sure that I took twice-daily walks across the high desert around Santa Fe (which is where we called home during the first three years post Peace Corps.). I would load my pack with gallon jugs of water and we would tramp at her frenzied pace for miles and miles. Without her, I would never have been able to undertake my Camino. I had to leave her home with Man while I spend 40 days making that pilgrimage of gratitude, but without Miss Zia’s help, I probably would never have had that life-enhancing experience.

We all learn lessons in life...if we are paying attention. Sometimes we do not even realize who is teaching us those lessons. My delightful three-legged friend taught me how to just get moving...the momentum will keep you going. And that is how you take a walk of 1000 kilometers: one step at a time. And she has taught me a lot about what it means to have heart and to share joy. I am lucky (and grateful) she came into my life.

Standing in that consignment store having an animated conversation with dog-loving strangers, I realized that I am one lucky human. I sure am glad Miss Zia was there to rescue me.

My Camino, my pilgrimage of Gratitude, continues in unexpected ways. Life is good.
Posted by Virginia ("Ginn") at 13:58

Luuuuuuuv it Ginn! I hope I catch sight of you walking Zia some morning when I'm zipping by!!! :-))))

Indeed! There are so many lessons for us in every encounter and relationship if we will only learn to know what we see, instead of seeing what we know!!! Blessings on you and Ms Zia!!! Love you!

Indeed! You and Ms. Zia touch many lives! There are so many blessings and lessons for us in every encounter and relationship if only we will learn to "know what we see" instead of "seeing what we know"! Sending lots of love your way!!! 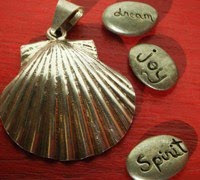 Welcome to My Camino Blog

In April 2009, I began my 500-mile trek across the rocky paths and mountains of northen Spain. I finished my walk on the the ancient Way of St James (the Camino de Santiago de Compostela) in early June 2009.

I hope you will enjoy my rambling, stream of consciousness obeservations of my experiences as a pilgrim on this historic pilgrimage route that really is only the begining.

Of course veteran pilgrims know: the Camino never ends - once a pilgrim, always a pilgrim. So, wherever YOUR path takes you, I wish you "Buen Camino". 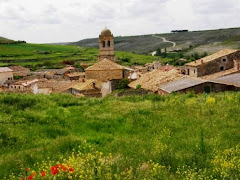 A Little About Me & My Life! 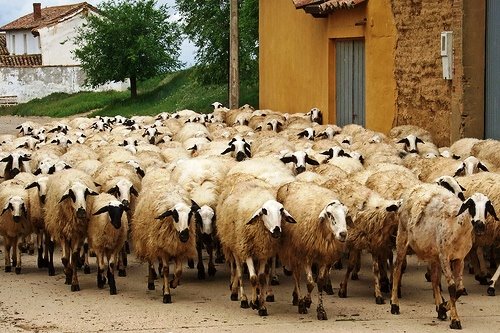